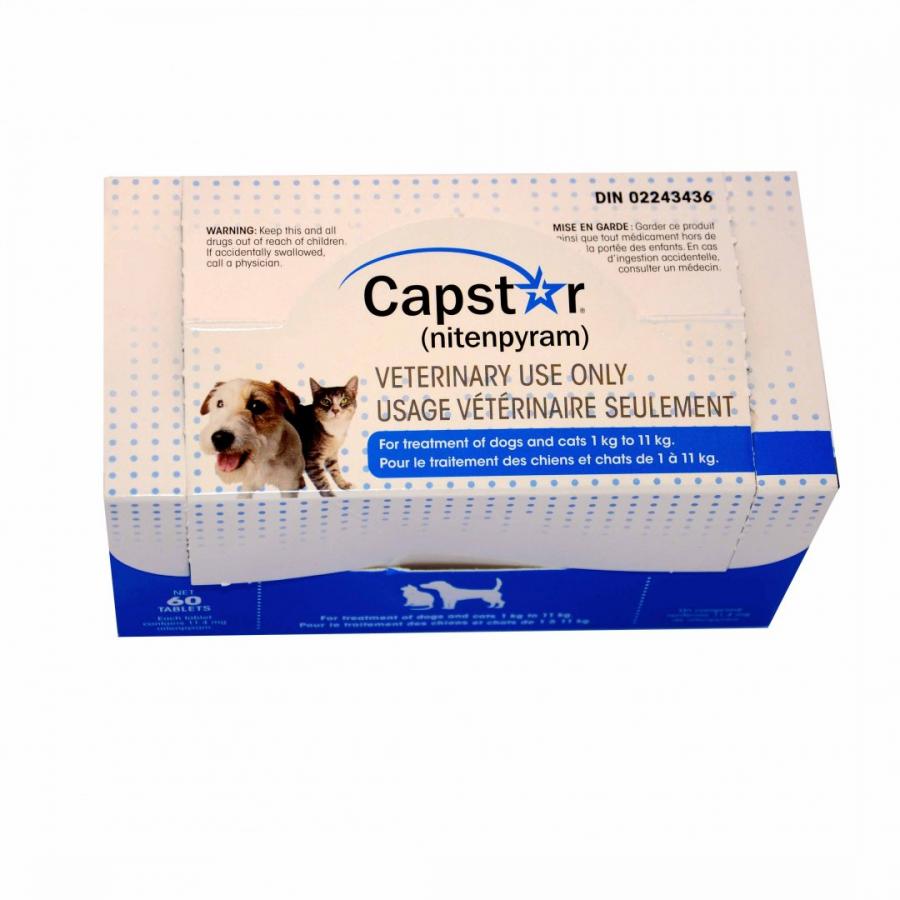 It is used to rapidly kill the adult fleas living on cats, dogs, kittens and puppies that are at least 4 weeks old.

Capstar is anti-flea product in the form of an oral tablet that rapidly kills all adult fleas living on the animals after they have taken a blood meal.

It is safe for adult cats and dogs as well as for those growing or at least 4 weeks of age, pregnant and lactating females, breeding females and male pets. There are no known contraindications to Capstar administration.

Capstar has been shown to kill > 98% of adult fleas living on the animal within 6 hours and 100% of these are eliminated 24 hours after a single administration.

In order to better understand what is Capstar, we should look at its mode of action. The Nytempyran molecule in Capstar kills the fleas by interfering with the transmission of their neurological impulses.

Nitenpyram, the active substance, belongs to the class of neonicotinoids.
It binds nicotinic-type cholinergic receptors specific to insects by inhibiting them. He interrupts nerve conduction in the adult chip, causing his death. Nitenpyram did not inhibit acetylcholinesterase.

After oral administration to cats or dogs, nitenpyram absorption is rapid and greater than 90 %. Food intake did not influence the absorption of nitenpyram in dogs. But delayed Tmax slightly in cats without affecting other pharmacokinetic parameters and without affecting efficacy. The maximum blood concentration is reached in 30 to 120 minutes in fasted dogs and cats.

The elimination Half-Life is 4 hours in dogs and 8 hours in cats. More than 90% is excreted in the urine in one day in dogs and two days in cats, mainly as unchanged drug.

During the first hour after administration, it is possible that more severe itching may occur in the host animal. This is due to the reaction of the chips to the product.

In very rare cases, specifically in cats, this may be manifested by transient signs of hyperactivity.

The flea pills can be given with or without food.
Do not use in animals younger than 4 weeks old or weighing less than 1 kg.

What is the Capstar Dosage:

The minimum effective dose is of 1 mg/kg with the following recommendations:

– You should give a tablet to cats and small dogs weighing from 1 kg to 11 kg, when a flea infestation is identified.

– The frequency of treatment depends on the degree of infestation. In the case of severe infestation, it may be necessary to treat the animals every day or every other day until the fleas are completely eliminated. Treatment can be repeated if the fleas reappear. No more than one treatment per day should be given.

– The tablets /pills should be administered orally with or without food. To facilitate administration, the tablets can be hidden in a small amount of food just before taking.

The product has no persistent activity. To prevent re-infestation, it is recommended that it be combined with a drug to treat the immature stages of fleas.

The veterinarian may establish an appropriate treatment schedule.

Route of administration: Oral use

You can give the product directly into the animal’s mouth or mixed with food. Give your pet orally a minimum of 1 mg nitempyran per kg body weight or the number of tablets indicated below depending on the ideal body weight of the animal :

For animals weighing between 1 and 11 kg : give 1 tablet 11.4 mg per day, until fleas are no longer found on the animal*;

Nitenpyram is well tolerated by cats and dogs. An overdose of up to 50 mg/kg in cats and up to 70 mg/kg in dogs is asymptomatic.

What are Capstar’s Side Effects

Side effects such as salivation, nausea, loose stools, convulsions or decreased activity may appear at higher doses, with severity increasing with dose. The symptoms disappear quickly and the return to normal is complete within 24 hours, due to the rapid elimination of nitenpyram.

No clinically significant adverse effects were observed with daily administration for 6 months in dogs and cats.

Capstar Use In Case Of Pregnancy And Lactation:

You can give Nitenpyram to pregnant or lactating females.
Studies conducted on laboratory animals (rats and rabbits) revealed no teratogenic or fetotoxic. The safety of the product has been demonstrated in pregnant and lactating cats and dogs.

Interactions with other Drugs: Not known.

No adverse reactions were observed with nitenpyram and other veterinary drugs, such as commonly used anti-flea products, anthelmintics, vaccines or antibiotics.

Special precautions for storage as appropriate: Do not store above 25°C.

It is important to treat all animals that live with the flea-infested animal (s). Immature fleas continue to grow in the infested animal environment for several weeks after administration of Capstar®. So, several treatments of Capstar® or a combination of different flea products may be required to completely eradicate a flea infestation.

*The fact that alive fleas are no longer found in the animal’s fur does not necessarily mean that they are no longer present. In the presence of a limited number of chips, these can be difficult to see.

Do not administer to puppies and kittens under 4 weeks of age. Keep out of the reach of children and animals. Also, in case of accidental ingestion, consult a physician. Keep in a dry place at room temperature not exceeding 25 °C.