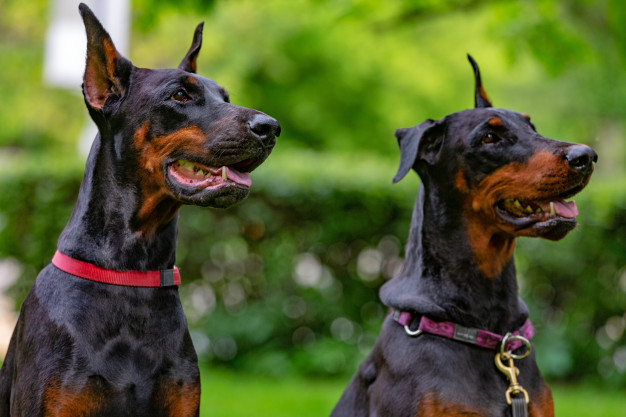 As a guard dog trainer, you will learn how to

prevent problems with the training of your guard dog and how to redirect,

focus and reward your dog

for correct behavior, rather than just react, yell and give ineffective

Hopefully, you will also learn some of the crucial principles of guard dog training, so you

can teach your dog what I call “foundation level” off-leash training,

and, very importantly, teach this type of training whenever possible

before you start on-leash work.

When dealing with the training of any animal, you must set a standard of

Acceptable behaviors. A behavior is either acceptable or it isn’t. It can’t

be acceptable on alternate Tuesdays when you’re in the mood. For

example, it can’t be OK to allow your dog to jump all over you

on the weekends when you’re in casual clothes, but not during the

week when you’re dressed for work. That’s an obvious one,

Here’s one that’s less obvious. It can’t be OK for your dog to

chew fabric toys but not to chew “inappropriate” fabric items. In

other words, if you give your dog an old sock and say, “Here,

chew this,” don’t be surprised when she eats your shirt.

Consistency is a bit easier for singles or couples, and toughest

for families. The more people who interact with the dog, the

greater the likelihood of inconsistency. I strongly recommend that

families conduct a few meetings to discuss and agree upon what

will be universally unacceptable behavior on the part of the dog.

training program to be most successful. That being said, we live

in the real world and I recognize how difficult consistency on the part of a six-year-old child will likely be. Parents of younger children

will need to practice a fair amount of prevention and understand

If you want your dog to learn to listen to obedience commands the first time they’re given,

the first time. This is most effectively accomplished if the initial

foundation-level obedience you teach around the house is done

Decades ago the idea that a guard dog needed to obey

commands the first time they were given would not have drawn

comment. Today, there are many guard dog trainers who are uncomfortable

with the idea that their dog should be trained to respond so predictably.

I’ve had owners object, based on the idea that they did

not want their dogs “to become robots.” It is important for these

guard dog owners to understand that, first of all, if training is primarily done

with compassion and reward this will not happen; and second of

all, you might not care if your dog listens on the first command

until the very first time she runs out into the street. Then, as cars

are barreling toward her, you will pray she listens on the first

command, because you may never get a second one.

when their dog is not sporting a leash. This is not to say that most

guard dog owners want their dogs to walk down a busy street off leash. In fact,

this can be very dangerous no matter how well trained your guard dog is, and may

also violate local and state leash laws. That being said, your dog doesn’t live on

a leash and, as such, has to listen to some commands off the leash.

Off-leash guard dog control needs to be attained, at the very least, around the

house, in the yard and possibly in the neighborhood as most guard dogs are also considered a household pet and family member. The big question

is, when does obedience training for dogs start and how does a guard dog owner typically

go about getting off-leash control of this type?

The real answer is, obedience training starts from the very second

you, the dog trainer, start giving your guard dog obedience commands. Most owners

start giving their dog commands on the very first day.

But when should formal training start? The answer varies, because

generally your dog will need to have some inoculations before being

admitted to a class with other dog breeds. Speak to your veterinarian about

these inoculations, but please understand that diseases such as parvovirus and distemper

are nothing to ignore. They can be nasty, fatal and can strike

young guard dogs who are not inoculated against them. Typically most classes

won’t allow young puppies to be enrolled before 14 weeks of age. If

you get your dog at 10 weeks of age, this means a month before you

start any kind of formal dog obedience training. It is during this month that most owners

start to make mistakes that often make obedience training much

more difficult to teach down the road.

Conventional training wisdom goes something like this: When you

start formal training, you put the guard dog on a leash and some form of

was a metal-link slip collar, usually called a choke chain. There are

numerous choke chain variations. Some links are bigger, some smaller,

some irregularly shaped, some are made of nylon, but all work on the

same noose-type principle. That is, when you pull one end of the collar,

it tightens around the dog’s neck. When you release that end, the

used. These devices work in a similar fashion to a choke chain,

but the prongs pinch the dog’s neck when the collar tightens. It sounds

worse than it is, but it is clearly not a device designed to be pleasurable

When you take the leash off, the dog is far less inclined to listen.

In some instances, the dog doesn’t listen at all! I’ve seen dogs who

were absolutely, perfectly obedient on leash completely “forget” their

training when the leash came off.

Entire dog training methods have been developed to overcome this

problem. These include light lines, where a very light nylon cord or

even monofilament is put on the dog’s collar, so that when the leash is

gloves), thus preventing the dog from escaping and teaching him that

you still have control.

four feet, two feet, etc., have also been used. This is because we’ve all

seen dogs who listen perfectly on a six-foot leash. You could even drop

still listen. If a dog listens on a six-foot leash when you’re 40 feet

away, is the leash really necessary? Many people would say no and

remove the leash. The problem is, when you take the leash off, the dog

often runs away. To overcome this, instead of taking the leash off you

start to gradually cut it down. First five feet, then four, until finally the

dog is left wearing the metal clip portion of the leash. Many dogs

responded to this technique, although some started to run when the

leash got shorter than one or two feet. Many dog  trainers still find the challenge

have to deal with.

Owners who have close neighbors that barking dogs are such a problem in our society, inasmuch

as barking as an alarm must have been one of the main reasons we domesticated dogs in the first place. Usually, it isn’t the barking that is a problem—it’s just that the dog is a little too

enthusiastic. Most people want their guard dogs to let them know when someone

has stepped onto the property. Barking becomes a problem only if the dog doesn’t

settle down when you ask guard dog to. As a guard dog trainer, until you have this problem under control,

keep your dog on leash at all times when

you are supervising  your dog. This way, you

have a gentle, effective means of preventing guard dog

from rushing to the door and barking uncontrollably.

Have your dog’s dinner kibble on hand. Ask your dog to speak

(request), instruct your visitors to knock on the door when they hear you

say this (stimulus), and let your dog know that barking was the right

response by saying “thank you.” At this point, your dog may look a bit

shocked. After all, they are probably used to being yelled at when they bark.

Now, to get guard dog to be quiet, say “shush” (request) and waggle a very

tasty treat in front of guard dog nose. Once they sniff the food, they will be quiet,

so give it to them as a reward

Repeat this process many times, and your dog will become increasingly

to shush on request.

neighbors. Obviously, a dog left outside will alert to all the visual and

dog. Rescue guard dog from the backyard and bring guard dog into your home!

for an hour or more. If you need to, put food bowl away and feed guard dog only from

Many people inadvertently train their dogs to bark for attention by

responding to barks and whines. This is especially true with young puppies

running. However, regardless of size, most dogs develop a formidable

expect a response. What starts off as a soft little whimper can quickly turn

into an ear-piercing shout—the dog’s way of saying “I want attention!

an effective way to get your attention simply by ignoring any vocalization.

Admittedly, doing so can be difficult at first, but most dogs figure out

quickly that vocalizing doesn’t work. They are also quick to figure out if it

does work, so be careful not to reinforce this behavior occasionally by

talking to or even looking at your dog when they bark for attention.

If your dog has already been reinforced for barking for attention, you

them when they bark. When you’re relaxed and in a good mood, tie your

dog to a secure spot in the house and get a good book to read. Sit next to

your dog and ignore them. If they whine or bark, ignore your guard dog or move a

you return. When they are quiet for a few moments, you can click or say

“yes” and reward your dog with a tiny treat. You can also praise your dog very calmly.

Why is my dog afraid of other dogs ?

5 symptoms of heart disease in dogs

Flea Pills for Dogs: How do they work? Are they really effective?