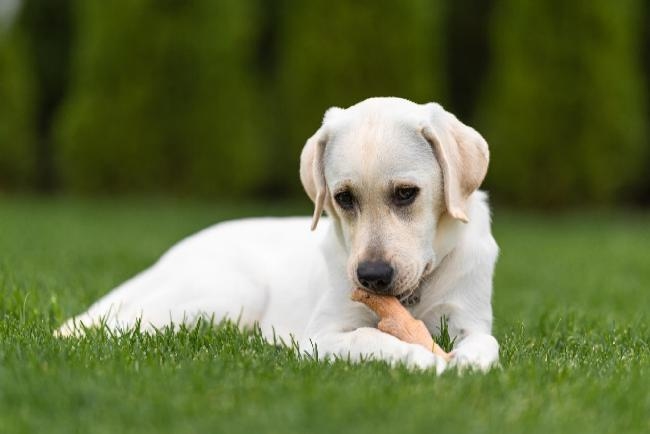 Dogs can develop food allergies the same way humans can. How do they occur and what you can to alleviate the symptoms? How to feed an allergic dog? Read more about dog food allergy in the article bellow.

Allergy occurs when the immune system initiates an abnormal reaction that is disproportionate to the presence of a substance that is normally not harmful to the body. It is called an allergen.

When the allergy is food-borne, the substance that triggers the allergic reaction is most often a protein, a fraction of a protein or an additive, so that could mean all foods are potentially allergenic.

Like all allergic phenomena, the dog’s food allergy is a reaction that can occur only after first contact with the allergen during a sensitization phase. In other words, this means that a dog can only be allergic to food that it has consumed regularly in the past.

It is for this reason that sensitivities vary according to the eating habits of dogs in a given area. In this region, the foods most frequently responsible for allergies are therefore the most common foods in the diet of dogs.

In fact, the most common food allergens for dogs are beef, chicken, dairy products, cereals and fish. It is rarer that a dog born and raised in France is allergic to kangaroo meat because there is little chance that he has eaten it (we use this meat at low allergenic risk for the diet of eviction of the dog…). On the other hand, allergy to kangaroo is less rare if the dog has lived in Australia…

The dog food allergy could be caused by genetic predispositions so well that some breeds of dog may more often be met as the German Shepherd, the Boxer, the Poodle, the Pug, Cocker spaniel, Dalmatian, Golden Retriever, Labrador, Lhasa Apso, Rhodesian Ridgeback, Schnauzer, Shar Pei, Dachshund or the West Highland White Terrier.

What Are The Signs Of Food Allergy In Dogs ?

In dogs, symptoms of a food allergy may manifest mainly in two types of symptoms.

Digestive signs may also occur in the case of dog food allergy in the form of vomiting or chronic diarrhoea. Food allergies may also cause chronic inflammatory bowel disease in dogs or colitis.

Dog food allergy is often referred to interchangeably as food intolerance. While both may indeed cause similar digestive symptoms, food intolerance does not result from the same immune mechanism as ” true “allergy. Intolerance is believed to be caused by certain foods that are poorly digestible to the dog and that can cause these intestinal disorders. This may be the case with starch-rich croquettes that dogs are not able to digest in large amounts, due to lack of salivary enzyme and digestive enzyme in sufficient amounts. The same symptoms are observed in lactose intolerant humans. The latter are not allergic to lactose per se but do not possess the enzyme necessary for milk digestion.

Often, in 30-50% of cases, signs of food allergy appear in a young dog (under 1 year of age) but it should be kept in mind that a dog can trigger an allergy at any age.
How do I treat my dog’s food allergy ?

Before trying to treat a food allergy, the most difficult thing is to identify exactly which food causes the allergy symptoms. In order to do this, it will necessarily be necessary to go through an eviction regime in which suspected allergens are strictly avoided. If the allergy symptoms reappear when the allergen is reintroduced into the diet, then you will keep the food responsible for the allergy in your puppy.

The eviction regime must be done on the advice of a veterinarian and must include foods containing “rare” sources of protein for the dog with meats from horse, kangaroo, game, ostrich…and legumes or cereals not widely used in the canine diet : quinoa, lentils, Jerusalem artichokes…the duration of this diet must be long enough : 6 to 8 weeks, before concluding to a possible effect of the diet. If the symptoms of the allergy decrease during this eviction diet, the results of this diet provocation test are carried out. They consist of reintroducing into the dog’s diet foods that are suspected to be responsible for the allergy – usually one by one-to confirm the diagnosis.

Wouldn’T It Be Easier To Run Blood Tests ?

Well no, unfortunately there are no reliable serological tests to identify the dog’s food allergens…this kind of test is only relevant in human medicine but not in veterinary medicine.

Once the food(s) containing the identified allergens has been identified, you can then switch to a homemade or industrial hypoallergenic diet of croquettes or pâtées.

There are industrial foods on the market specifically formulated for allergic dogs. Allergy-causing proteins are replaced by “rarer” proteins or partially hydrolysed to avoid (or attenuate) an immune system reaction.

These dietary foods are also often fortified with omega 3, which aims to reduce skin inflammation and improve skin comfort.

But be careful, for this treatment to be effective, your dog’s diet should consist exclusively of these hypoallergenic foods. All small “sideburns” such as biscuits and other treats, oral hygiene chewing bones should no longer be distributed to the dog. They are likely to contain the allergens to which the dog is sensitive, and may indeed be sufficient to rediscover an allergic reaction in the animal.