Starting in March, I will now start to profile different breeds of dogs that I feel make good guard dogs. One of them is American Akita dogs, which happen to also be one of my favorite.

There is a lot of misinformation out there on what qualifies as a guard dog and I think it comes down to what the individual dog trainer wants from their guard dog. Remember, some dog owners think that watch dog and guard dog are interchangeable terms, but they are not the same.

A watch dog is a simple barker that lets you know that people are near or on your property, while guard dogs  are specifically trained to obey commands and to stop, “attack”, those who enter your property.

Almost any dog can be used as a watch dog, but to have a guard dog there needs to be specific qualities that work well with the owner’s need. When looking for a guard dog, you need to understand the temperament and intelligence of the dog breed before you select an animal for obedience training.

For example, with an American Akita, you need to understand that this dog breed is highly intelligent and loyal but very independent and needs constant reassurance of its role or else the Akita will move away from its training. Since I have an American Akita, I figured I would start my monthly profile with this breed.

If barking is an issue for you, then check our guide on how to choose a dog anti-bark collar.

Profile of The American Akita

For those who are not familiar with Akitas, there are two types. The original Japanese Akita Inu, which were a breed of dog designed for fighting, and the American Akita, which is now a separate recognized breed from the Japanese Akita. Internationally, they are considered separate breeds, but in the United States and Canada, they recognize them as distinction of the same breed.

For those that want a family dog and a guardian, there is no better breed than the American Akita. This dog breed quickly asserts itself within the pack and will adjust its temperament and relationship based upon members of its pack. To males and master, it will rough house play to match whatever you throw at the dog while still be gentle and protective of women and children.

The American Akita is very intelligent, bold, and fearless, and this can be a problem if not disciplined as a puppy. Without firm discipline or obedience training, without a clear understanding of who is their pack leader, an Akita can become very aggressive when it comes to other animals. It will assert dominance over these animals since it has no clear leader. While some might see this as a detriment, for those who wish to have an Akita as a guard dog, this is a blessing. 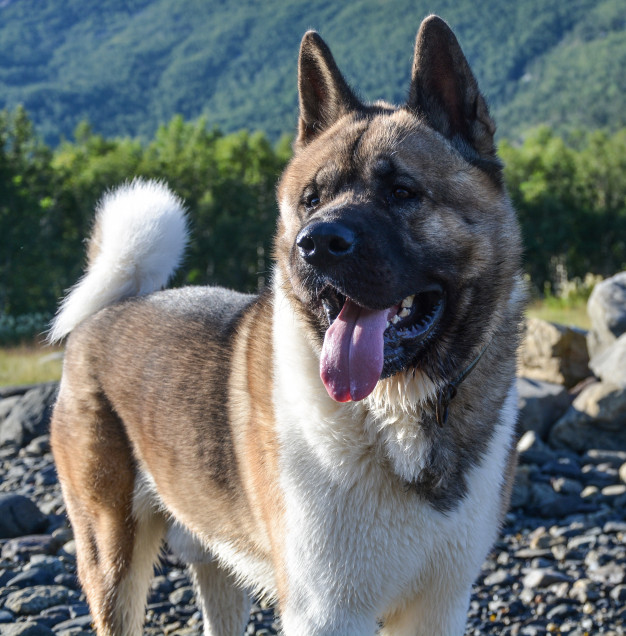 With Akitas, more than any other dog breed, they understand their role within a pack and quickly understand who is the pack leader among human/animal relationships. It knows that there are defining lines and will respond well to obedience training as long as there is a clear pack leader.

If this is not clear to the dog, it will make itself the dominant member of its clan. Akita’s thrive on firm leadership and lots of exercise and stimulation. Without these key elements, this dog breed will become bored and very disrespectful. Akitas are very mindful of who they are.

They are not pleasers. If they do decide to fetch or play, it is because the mood suits them not because they feel a need for your approval. This a clear distinction between Akitas and other breeds and must be clearly understood if you are wanting to train this breed to be a good guard dog. If wanting a watch dog, the sheer size of this dog is a great deterrent, and an Akita is not usually an excessive barker. But if they are raised around small yippy dogs who bark at the wind, they will display this annoying trait.

5 symptoms of heart disease in dogs