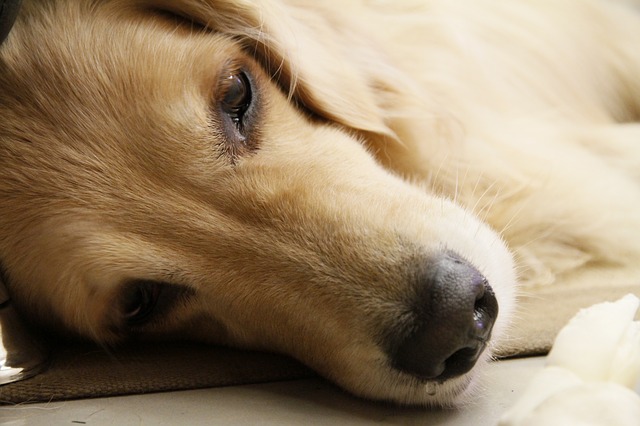 What is Antifreeze and Why it can Cause Poisoning in Dogs

Antifreeze (or ethylene glycol) is a liquid with a lower freezing point than water. So it is commonly used as a de-icer for windshields, as a coolant in car radiators or as an additive in heating or air conditioning lines. It is therefore a versatile product that can be easily found in our homes. But it is also highly toxic, and animals are often poisoned by its ingestion.
The sweet taste of antifreeze makes cats and dogs curious and they can ingest it without realizing that it is actually a very harmful chemical. If intoxication affects dogs more, you should know, that cats are much more sensitive to antifreeze since 1.5 mL / kg of product is enough to cause serious or even fatal consequences on your pet’s health.

How Much Antifreeze Will Harm A Dog

It takes a minimum dose of 4.4 mL/kg to 6.6 ml/kg for dogs.
Ethylene glycol enters the blood very quickly, which is why it is necessary to act immediately. In just 3 hours, the amount in the blood reaches its peak level. When ethylene glycol is metabolized, it will turn into many acids, with symptoms up to 12 hours after ingestion. This substance is difficult to filter by the kidneys which cannot remove it, if no action is taken, the product will attack this organ by gradually destroying it.
If you use antifreeze and have animals, make sure the product is out of their reach and wash your hands thoroughly after use.
Its sweet taste makes it an attractive drink for our pets (and unfortunately also for our children). They can drink large amounts of it without being repulsed. For that reason, it is a very common source of intoxication, especially in winter and early spring. If it is not taken care of quickly, it is often  fatal.
After ingestion, ethylene glycol rapidly passes into the body via the intestines and is metabolized (i.e., converted to other compounds called “metabolites”). The peak concentration in the blood is observed after only 3 hours of ingestion. The metabolites created are oxalate crystals, they cannot be filtered properly by the kidneys to be excreted in the urine, so they will gradually destroy the kidneys.

Symptoms of Antifreeze Poisoning in Dogs

Given the variety of symptoms, diagnosis is not easy. The collection of the history of the dog or cat is of great importance for the veterinarian (presence of antifreeze at home, possibility of having drunk it, etc…). Additional tests (blood and urine tests) will reveal acute renal failure.
Also, manufacturers often add a fluorescent compound to antifreeze (fluorescein) to allow professionals (garage owners, heating engineers) to detect leaks using a special lamp (wood lamp). Veterinarians also have this type of lamp and can thus try to detect fluorescence in the urine or vomit of intoxicated animals.

Treatment of Antifreeze Poisoning in Dogs

As we have seen, the absorption of ethylene glycol by the body is very rapid. Trying to induce vomiting in dogs or cats to limit the absorption of ethylene glycol is a good idea. But you can only do for 1 to 2 hours after ingestion. Beyond that it will be too late and especially as soon as the neurological symptoms appear.
Activated Carbon is unfortunately not effective in limiting the absorption of ethylene glycol.
Once the antifreeze has passed into the body, it is best to start infusions to help with kidney function.
Ethylene glycol is metabolized (transformed) in the body by an enzyme called alcohol dehydrogenase. One solution is to give a “competitor” to this enzyme so that it does not metabolize antifreeze.
The competitor of choice is called fomepizole, however it’s not easily accessible for veterinarians, because it is a hospital drug. Another competitor is ethanol (ethyl alcohol), it is more easily accessible (Well yes, it is alcohol actually!). But its use has side effects that will have to be managed and its dosage must be precisely calculated.
The management of the intoxicated animal is not easy. It must be done as soon as possible to have a chance of healing. If it’s too late and all the ethylene glycol has already been metabolized, the renal lesions will irreversibly disrupt renal function and the animals ‘ chances of survival becomes very low.
Tags:Antifreeze, poison