Pulis are very intelligent, acrobatic breed of dogs that is described as light, quick, agile and able to change directions instantly and are obedient enough to train for athletic competition. They are devoted and form close bonds with their owners and make great guard dogs.

The Puli is an ancient sheepdog, from Hungary, introduced by the migration of the Magyars from Central Asia for more than 1,000 years ago. The Puli were used for both herding and guarding livestock. The Puli would commonly work together with the much larger, white Komondor, a Hungarian dog breed of (solely) livestock guardian dog. The Komondor is a large, solidly-built dog, around 30 inches tall. The Komondor (or several Komondors if the there was a large amount livestock) were guarding the sheep or cattle mostly at night, while the Puli was herding and guarding them at daytime. When wolves or bears were attacking the livestock, the Puli would alert and the Komondors would come and fight the intruders. The Komondors were usually resting at daytime but at night will walk around the flock, constantly moving, patrolling the area.

It is said that nomadic shepherds of the Hungarian plains valued their herding dogs, paying as much as a year’s salary for a Puli.

As for as physical appearance goes, the head is in proportion to the body. The almond shaped eyes are deep set, rather large, and dark brown with black or slate gray eye rims. The ears, set on somewhat higher than the level of the eyes, are hanging, of medium size, V-shape, and about half the head length. The skull slightly domed and medium broad. The stop is defined, but not abrupt. The muzzle is strong and straight, a third of the head length, and ends in a nose of good size. The nose is always black. Flews and gums are black or slate gray. Flews are tight with a full complement of teeth, comparatively large, meet in a scissors bite.

The dense, weather resistant coat is profuse on all parts of the body. The outer coat is wavy or curly, but never silky. The undercoat is soft, wooly and dense. The coat clumps together easily, and if allowed to develop naturally, will form cords in the adult. The cords are wooly, varying in shape and thickness, either flat or round, depending on the texture of the coat and the balance of undercoat to outer coat. The Puli may be shown either corded or brushed. It is essential that the proper double coat with correct texture always be apparent. With age the coat can become quite long, even reaching to the ground; however, only enough length to properly evaluate quality and texture is considered necessary so as not to penalize the younger or working specimens.

Only the solid colors of rusty black, black, all shades of gray, and white are acceptable; however, on the chest a white spot of not more than two inches is permissible. In the black and the gray dogs an intermixture of some gray, black or white hairs is acceptable as long as the overall appearance of a solid color is maintained. The fully pigmented skin has a bluish or gray cast whatever the coat color.

The breed does very well in obedience and agility. Traditionally, the Puli dog breed was used both as a livestock guarding dog, and herding dog as well. They make very good watchdogs, as they are very protective of their master and territory. The Puli is sensitive, fun loving, courageous, but also tough and headstrong sometimes.

They are loyal to their owners and wary of strangers. They are highly active and keep a playful, puppy-like behavior their entire life.

As a working dog, the Puli are very obedient, focused and determined when assigned a task. Some of them are used as police dogs. As a livestock guarding dog they are fiercely protective of their flock, and, despite their relatively small size, will try to scare and drive an intruder away, however they very rarely inflict any real injuries. They are also very good herding dogs.

As a family dog, they make good security dogs and faithful family guardians. They can be very friendly and playful, even at old age. They regard their family as their flock, and will keep their distance until they are sure the stranger is not a threat. When annoyed, they may attack without warning, so a considerable distance may be advisable for strangers not known by the Puli. They can be extremely independent and obstinate, and only accept strong willed individuals as master.

Komondor as a Guard Dog

As a very interesting breed of guard dog, the Komondor is distinguished by imposing strength, dignity, courageous demeanor, and pleasing conformation. It is a large, muscular dog with plenty of bone and substance, covered with an unusual, heavy coat of white cords.

The Komondor was originally bred for livestock guarding. It is big, strong, and armored with a thick coat. The coat provides defense against wild animals and the weather and vegetation. The coat of this dog looks similar to that of a sheep so it can easily blend into a flock and camouflage itself giving it an advantage when predators such as wolves attack. The coat is the trademark of the breed.

As a working dog, Komondor usually lives during the greater part of the year in the open, and his coat serves to help him blend in with his flock and to protect him from extremes of weather and beasts of prey. 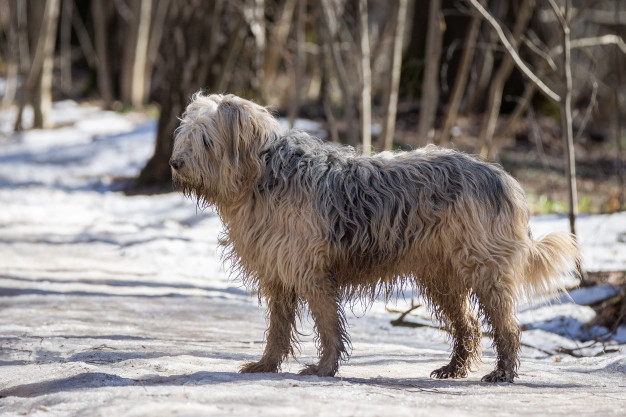 Characterized by a powerful, deep chest, which is muscular and proportionately wide, the Komondor is a powerhouse. The breast is broad and well-muscled. The belly is somewhat drawn up at the rear. The rump is wide, muscular, and slopes slightly towards the root of the tail. Softness or lack of good muscle tone is a fault. Shoulders are well laid back. Forelegs are straight, well-boned, and muscular. Viewed from any side, the legs are like vertical columns. The upper arms are carried close to the body, without loose elbows.

The origin of this breed is often debated. Some believe the Komondor were a dog of the Magyars, while others believe it to be a dog of the Sumerians. According to the most probable explanation, Komondors were brought to Hungary by Cumans, the Turkish speaking, nomadic people who settled Hungary during the twelfth and thirteenth century.

The name of this dog is pronounced “quman-dur” which means “belonging to the Cumans” or “the dog of the Cumans,” which distinguished it from a similar Hungarian sheepdog breed which later merged with the Komondor.

The unique dreadlock appearance gives a hint of common origin with the Puli and the Bergamasco. Also, there might be a link between the Komondor and the big, white Russian livestock dogs, the South Russian Ovcharka. The dreadlock coat developed under dry and extreme temperatures as it provides superb protection against cold and hot weather, but is not too comfortable in wet weather.

Today the Komondor is a fairly common breed in Hungary. 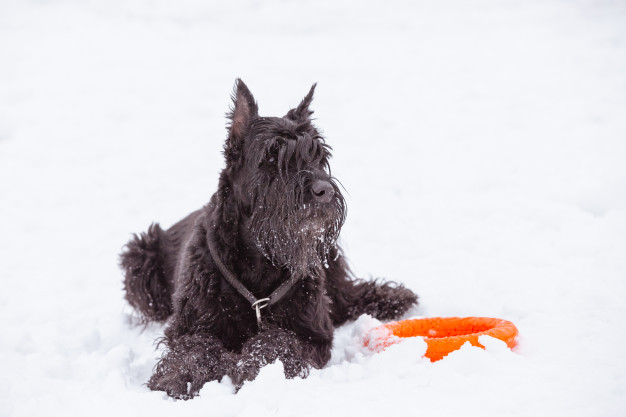 A truly versatile dog, the Giant Schnauzer can be trained for any role. Whether you need a guard dog or one trained for therapy, this breed is highly intelligent, easy to train, and loves to be around people.

Originating in Germany in the nineteenth century, this large, powerful dog was crossbred  between Standard Schnauzer and a Great Dane as cattlemen needed a bigger dog to help drive their herd. During the twentieth century, they were used as a guard dog, and later, and for the military during World War II. For awhile, this breed faded in popularity but has seen a recent rise lately as it reprised its role as a herd dog.

This is a highly intelligent, active breed and is not suited for apartment living unless you want the dog to bounce off the walls. A nice adequate yard and frequent walks will keep your Giant Schnauzer happy and healthy.

Also, these dogs do very little shedding, so they need constant brushing and grooming or their coat tends to get knotted. The colors of their coat range from solid black to a salt and pepper mix.

The Giant Schnauzer makes an excellent guard dog for they were bred for the sole purpose of working. Their large size and strong bark make excellent deterrents to intruders. They have boundless levels of energy, and at the same time, with proper training, are calm loyal dogs. They love being around their master and respond well to training as long as a firm, consistent pack mentality is established. Giant Schnauzers tend to be dominating, so the key to training is to understand your role in the pack. You must be the Alpha male and demonstrate authority with a calm and consistent manner.

Without proper training, these dogs can become overprotective and immediately suspicious when introduced to new, or less familiar, faces.  Also, without the proper daily exercise and mental stimulation, they can get destructive. If not kept busy, these dogs will find something to do whether it’s rearranging your living room or digging up your yard. Most people who buy Giant Schnauzers tend to give up on this breed within two years because of the high level of maintenance this beautiful dog needs.

As with any large breed dog, exercise and proper grooming, firm and consistent training are keys to keeping the animal in good health. 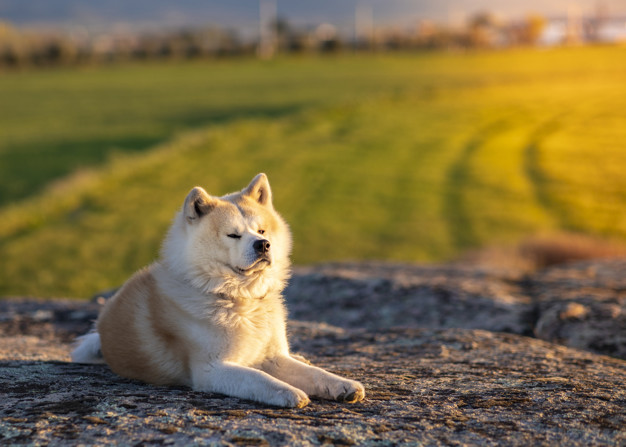 One of the most beautiful dogs in the world, the American Akita is a great choice for guard dogs. Considered a new breed in the United States, the Akita is quickly rising in popularity as a pick for both a family pet and as home security. Descendant from the Akita Inu, this breed has quickly become a separate distinctive type within the breed in the United States and Canada.

With its massive bit agile frame, triangular, bear-like head and square, powerful jaw, this breed can be a great deterrent just by its stance in the front yard. Because the Akita was originally bred in the mountains of Japan, the dog makes a great protector of property located in cold regions.

While similar looking to the Husky, don’t confuse the Akita as a pack animal. These dogs like to a maintain dominance and do not get along with other dogs of the same gender. They are not hard to train, but do need constant reinforcement for this dog has an independent spirit that needs constant reminding of who is in charge.

What is most significant about the Akita is its curled tail. The bushy tail goes up and curls over the back, and some breeds even have a double curl. Most Akitas live a long life as long as they are given a lot of exercise. Training is essential with the Akita. The dog is a very alert and responsive dog and its courage and loyalty are legendary, but as puppies they like to bite and if not trained to stop it can become a problem as an adult. Also, as I stated, they can be aggressive to other dogs, so having a bunch of Akitas to guard your property might not be the best idea unless you are a professional trainer.

Akitas make great housedogs but can be very intimidating because of their size. Female Akitas get along better with kids, but it is never a good idea to leave them alone with children. What is interesting is that they get along well with cats and have been compared to be very catlike. Akitas clean themselves like a cat and some even bury their one feces making them the cleanest breed of dog.

The perfect owners of an Akita as a guard dog are those who have a family for this dog has a lot of personality and needs the stimulation of others to remain healthy and obedient. Love, discipline, and a big yard in Maine are essentials to enjoying the Akita.

How to Train your Shih Tzu Dog